Scoring is the heart of the game of bridge and learning how it works will make understanding the bidding much easier.  I know it did when I first started learning to play.

Knowing how the scoring works helps you to understand why it is better to play in No Trumps or a major trump and it helps you understand why sometimes it can be advantageous to bid to the 5, 6 or maybe even 7 level when you could stop bidding at a lower level and be certain of achieving your contract.


From this table you can see why it is advantageous to bid for game in NT or a major suit, if you can, as fewer tricks are needed to achieve the "game" bonus.

Once you've doubled, the opponents have the option of "redoubling" if they believe they are certain to make the contract.  This means that your opponents will score 4 times the points for each trick they make if they achieve the contract, plus a 100 point extra bonus.

There is no increase  in the part score bonus which remains at 50 points.

There are two types of slams.

You only score an additional bonus for these if you bid to make them.

If you bid for fewer tricks, but actually achieve 12 or 13, you will only score the normal game bonus, not the additional slam bonus.

Both of these are in addition to the regular game bonus.

Now that you have finished the twelve lessons on this site, you are more than ready to take your trial membership at No Fear Bridge.  Just Click Here to join for your two week trial.  I know you'll love it and become a better bridge player in no time.
Posted by it teacher at 07:58 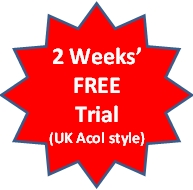